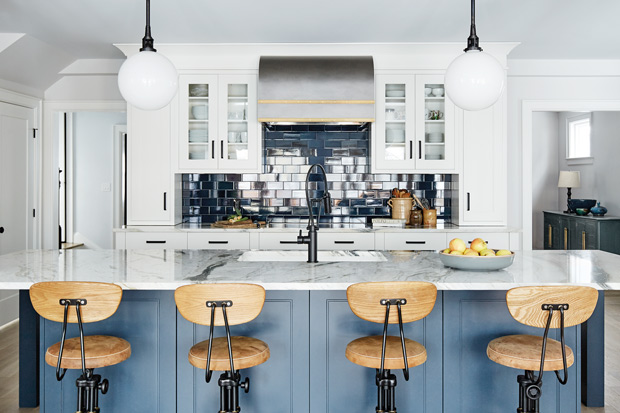 The owners of this 1920s Dutch Colonial-style home in the south end of Halifax, Nova Scotia, were newly transplanted New Yorkers, so perhaps it wasn’t a complete shock when they asked local designers Colin Blanchard and Kenneth McRobbie of 31 Westgate for a slightly industrial, Brooklyn brownstone-inspired design for their eat-in kitchen.

As part of an overall renovation, Colin and Kenneth expanded the kitchen to include an open-concept dining and family room. A large island placed between structural columns provides additional seating for six during parties, while easy-care finishes stand up to life with three young children. A signature maritime navy was chosen for both the island and backsplash. “It’s a blue that will stand the test of time and not feel dated,” says Kenneth. “It can look blue or black, depending on the light.”

Scroll down to tour this charming East Coast kitchen!

How To Refresh Your Space Without Buying Anything New

This Striking Green Kitchen Has A Fresh Take On Traditional Style

This Bright & Cheerful Blue Kitchen Is An Instant Mood-Booster

Personality & Practicality Are The Key Ingredients In This Kitchen